Driver of the Year

Presented to an ICSCC driver who has demonstrated outstanding ability, sportsmanship, and the promotion of the organization in the finest spirit of Conference.

In 2001 the Driver of the Year trophy was renamed in honor of Bob and Hilda Randall.

The ICSCC Driver of the Year is selected by the Competition Committee. 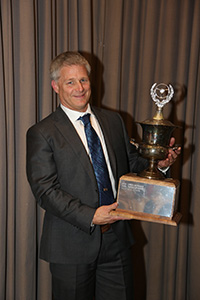 Novice of the Year

Presented to the driver from the Novice Program who has demonstrated outstanding development and ability on and off the track over the course of the season.

The Novice of the Year award is named for George "G.B." Sterne. G.B. and his wife Lydia were active supporters of Conference, running the Novice Program in the late 1960s, as well as G.B. acting as our first Vice President.

The ICSCC Novice of the Year is selected by the License Director.

Worker of the Year

Presented to the Race Officials Division member who has demonstrated their passion for the sport, works events at both their home track and the other tracks in Conference, is an ambassador for the sport and for Conference, and is involved in their club at multiple levels.

The ICSCC Worker of the Year is selected by the Race Officials Division Director.

Presented to the ICSCC driver who has received the most votes from Conference volunteers over the course of a season, the Worker's Choice Award was created in 2010 as a way to recognize the support the volunteers receive from the drivers. Each volunteer has the opportunity to vote for their favorite driver at each championship event.

The ICSCC Worker's Choice Award is selected by members of the Race Officials Division.

In appreciation of Dick Whittemore’s contributions to ICSCC over the past 25 years we have retired his number (45) from group 1. Dick raced many different types of cars over his 25 years of racing with ICSCC. He drove Club Fords in 1998 and ended his racing career driving a PRO3. Dick's dedication and service to ICSCC included numerous years as Insurance advisor, legal advisor and new race track advisor. Dick was the person Naughton Insurance requested to oversee the approval of Spokane Raceway and TC's track at Port Orford in the mid 1990's. Past Presidents used him many times as an advisor on a variety of issues. Dick would always do anything asked of him to help conference. He was the first person I know of who left a donation ($2500.00) to ICSCC in his will, showing his dedication to our organization.